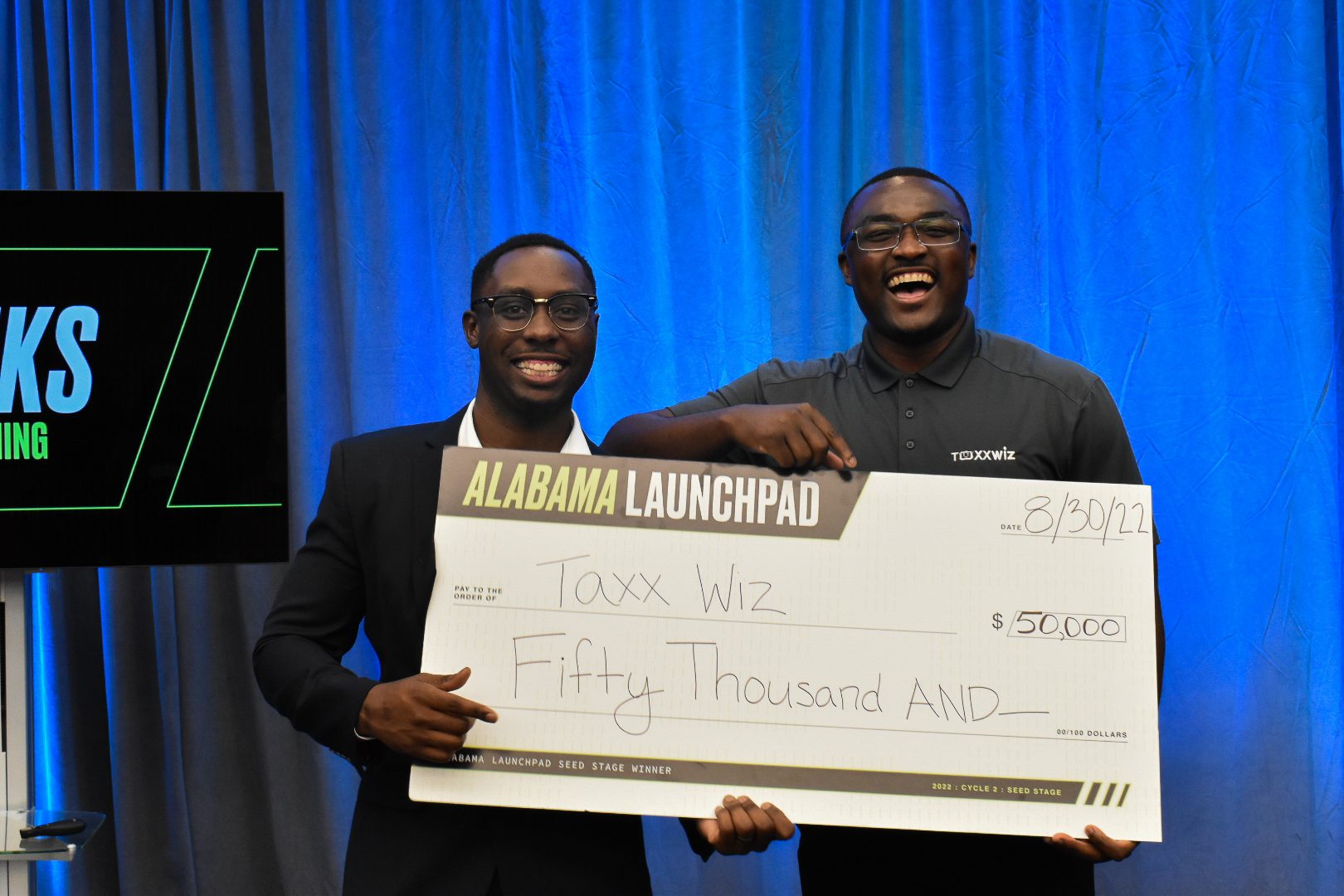 HUNTSVILLE, Ala. (Aug. 30, 2022) – Two startup companies competed among nine other finalist companies to earn a combined $75,000 in non-dilutive funding in the Alabama Launchpad (ALP) Cycle 2 2022 Finale. The Economic Development Partnership of Alabama (EDPA) hosted the in-person finale, at HudsonAlpha Institute for Biotechnology, from 5-7 p.m., on Tuesday, Aug. 30, 2022.

“It’s an honor to be a finalist in Launchpad,” stated Hobie King, Co-Founder and COO of Ride Resorts. “Regardless of the outcome, this process has been super valuable in refining our vision and learning where our weak points were. This money will help us accelerate our proprietary technology of RFID gates. This will be the next step toward really being a technical park.”

TaxxWiz, winner of the early-seed stage prize of $50,000, gives tax professionals the ability to be their own Turbo Tax Live. Recently relocated from Dallas, TX, TaxxWiz is changing the average prep time from 4 hours to 20 minutes.

“Winning definitely feels good,” stated Tevin Harrell, CEO of TaxxWizz. “Just being in Launchpad and talking to Launch Advisors really helped us take our business to a whole new level. Now – winning actual money – I think the sky’s the limit for us.”

Each finalist company received intensive mentorship, through both one-on-one and group session training with Launch Advisors, to prepare for the ultimate finale judging panels.

“It was truly an honor to be a part of the judging panel and experience first-hand the hard work and dedication shown by the participating companies,” stated Joshi. “All of the entrepreneurs answered hard questions, took feedback and gave it their 100 percent. Alabama Launchpad’s continued efforts in championing the Alabama entrepreneurial ecosystem is truly amazing.”

Cycle 2 2022 brings Alabama Launchpad to new milestones – it has now funded 110 Alabama startups since its inception in 2006. Over the past 16 years, Alabama Launchpad has awarded over $5.8 million in non-dilutive funding to the winning companies, which today have an estimated combined post-money valuation of more than $850 million and employ more than 1,120 people.

“Alabama Launchpad continues to be a dynamic force for fueling innovation and entrepreneurship in Alabama,” stated Angela Till, Deputy Secretary at the Alabama Department of Commerce. “The Department of Commerce is proud to provide funding to help transform a solid business concept into a real business.”

“From mountain bike resorts that impact Alabama’s tourism industry, to therapy programs that assist those who have served our country – it is the places and the people that Alabama Launchpad is making a huge difference in through these stellar companies,” stated Elaine Fincannon, Deputy Director at ADECA.

The Alabama Launchpad program has funded growing companies like Croux, CHONEX, Vulcan Line Tools, Immediate and more by offering non-dilutive prize money for its pitch competition. The EDPA is a private, nonprofit organization that supports business recruitment and expansion efforts in Alabama and promotes innovative and emerging startup companies through its Alabama Launchpad program.

The Alabama Launchpad: Social Impact Competition, presented by Alabama Launchpad and Alabama Power Foundation, is now accepting applications through Sept. 15. Applicants must be committed to fostering both economic growth and social impact in the state of Alabama. To learn more and apply today, please click here.

Established in 2006, Alabama Launchpad is Alabama’s most active, early-stage seed fund investor, driving innovation and job growth through startup competitions and ongoing mentoring for Alabama entrepreneurs. Alabama Launchpad is made possible by the generous support from the Alabama Department of Economic and Community Affairs, the Alabama Department of Commerce, Blue Cross and Blue Shield Caring Foundation, Wells Fargo, Alabama Power and the Daniel Corporation Foundation. It is the state’s longest running business plan and pitch competition. Over the past 16 years, Alabama Launchpad has invested over $5.8 million into 108 Alabama startups. The winning startup companies have generated over 1,120 jobs for the state and have a combined post-money valuation of over $850 million.

Learn more about the
Industry in Alabama